Fabio Quartaro burst onto the scene in his rookie MotoGP season, claiming his first pole position at Spanish GP only four races into the championship. (Petronas Yamaha Sepang Racing Team/)

Fabio Quartararo was the true revelation of the 2019 MotoGP championship and there is a lot of expectation around him for the upcoming season. 2020 should have been his year, but the COVID-19 pandemic has reshuffled the cards, and MotoGP riders will tackle a revised calendar that resumes at Jerez, Spain, on July 19 with 13 races in less than four months. Twenty, by the way, is also Fabio’s magic number; it is his date of birth (April 20, 1999) and his racing number.

Quartararo is eager for the green flag to drop. The Frenchman will be called to deal with the astronomic pressure to prove that Yamaha made the right choice to contract him to its official factory team for the 2021 and 2022 seasons, and to conquer the hearts of the Valentino Rossi fans as he will take the Doctor’s seat.

Maria Guidotti: On July 15 at Jerez you will jump back on your YZR-M1 after four and a half months without riding. How have you prepared during the COVID-19 pandemic?

Fabio Quartararo: During the lockdown, I worked a lot on the cardio, as it was the only thing we could do. Once the government lifted the lockdown in Andorra, I returned training with my motocross bike. I feel physically fit and mentally ready to focus only on the track. It’s good that the season resumes with a day of testing on the same track on July 15. I think we will recover the pace quite easily because we know Jerez very well. The main difference will be the temperature—it will be much higher than what we used to find in April.

What kind of championship do you expect?

With such a tight calendar, it will be important not to take many risks, especially in the practice sessions. Regarding the race approach, last year I learned the lesson that it’s better not to override when we struggle. 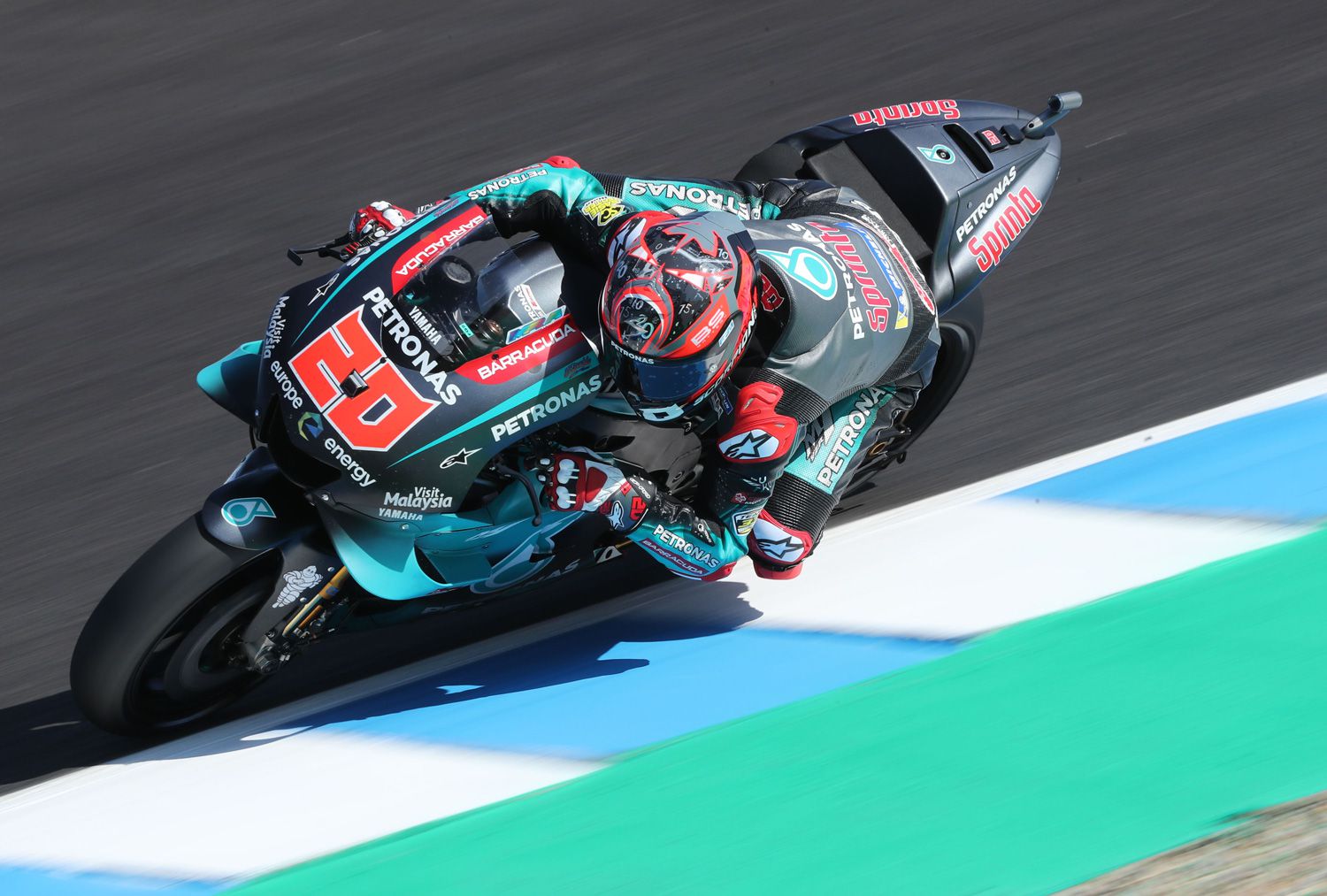 This year you are promoted to a factory-spec bike.

Yes, it’s a new bike for me as this winter I only did five days of testing. I’m really excited to return on track and I’m confident that we can do well. My target is to fight for the podium and possibly for the victory every Sunday.

When you joined the Moto3 class at just 15 years old, the pressure almost crushed you. How do you deal with the pressure now?

I have learned how to deal with the pressure that comes from the high expectations of the people. Nowadays, it’s just a positive motivation. I’m relaxed and focused thanks to the fact that I have a contract with Yamaha until 2022. This was my priority. Now I can focus only on track results.

How can Marc Márquez be beaten?

I don’t know yet, but I hope to discover it soon.

Related Content: Maverick Viñales Wants To Be First At The Finish Line

You are considered Márquez’s main rival? How do you feel about it?

This is a good sign. It means we have been working well. Moreover, I have a good relationship with Marc. On track we are rivals, but off track we are friends. When I joined Moto3, I used to race for Emilio Alzamora’s team (Márquez’s manager). I had the chance to talk with him [Marc] many times and to ask for advice.

Do you think the relationship with Márquez will change?

After the [2019] Valencia GP, Marc told me I would be a strong rival in 2020. More than pressure, for me it was a kind of reward for the hard work done. I like to find myself in this situation. 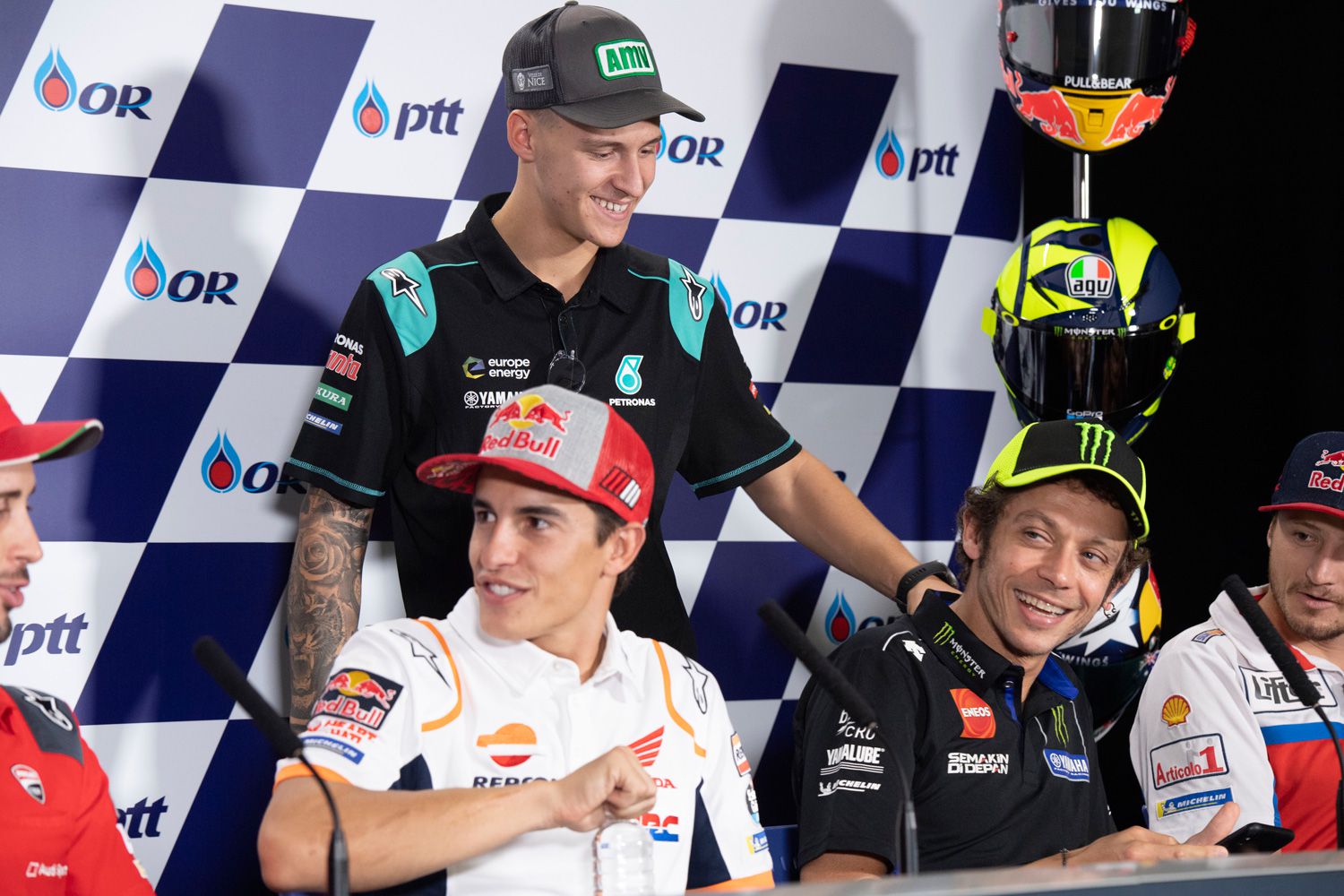 What is Márquez’s strongest point?

He has many strengths, but I’m always impressed by his adaptation skills. He is fast no matter if it’s wet, windy, or super hot.

In 2021, you will take Valentino Rossi’s spot at factory Yamaha. How do you feel to be Valentino’s replacement?

It’s an incredible feeling. When I was a kid, I used to wait outside Valentino’s motorhome for an autograph. I’m still not realizing what it will be like to ride for the factory Yamaha team. I also never expected to ride with him. I have a good relationship with him and, for me, it’s a dream come true.

If you had to choose a quality of Valentino to have yourself, which would you pick?

The image and the relationship he has with the fans. I remember the podium celebrations he used to do in 125cc. It was pure fun and people loved it. Even my grandmother, who didn’t follow MotoGP, knew about the Doctor! He was able to reach an incredibly wide audience. I also like his battles, his aggressive riding style. His passes on Sete Gibernau and Casey Stoner remain remarkable.

Will you be able to capture Rossi fans?

When I signed, I actually wondered if Valentino’s fans would see me and if they would be happy. I hope they are on my side as I also grew up as a fan of the number 46.